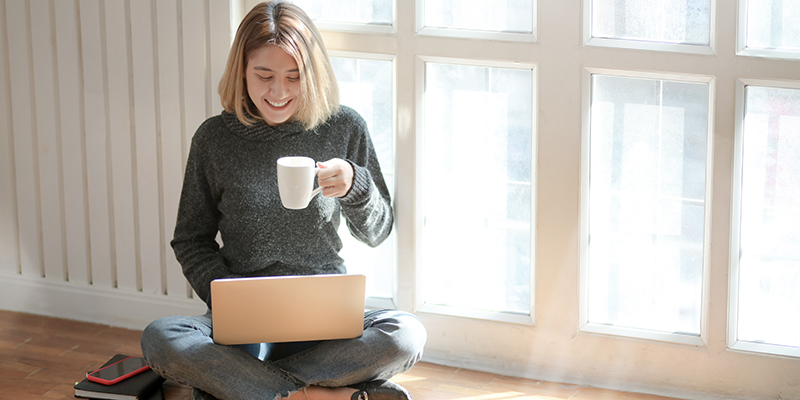 A Short History of Telecommuting

Posted by Thomas Stenitzer on August 6, 2020
Telecommuting - also called telework - is a work arrangement in which employees do not commute or travel to a central place of work. It’s one of the big buzzwords during this pandemic. For many companies, this seems to be a new concept - like it was when the “Internet” suddenly appeared, some 25 years after it was invented.

It all started with the "working man"

Some of your ancestors, the Homo ergaster (roughly translates to "working man") to be exact, lived throughout eastern and southern Africa between 1.9 to 1.4 million years ago. There was no such thing as going to a different place to labour. They crafted the tools they needed close to their dwelling places.

Many millennia later, labour remained clustered in the home. In the middle ages, aristocrats were supported economically by the labour of peasants, who formed the population's majority.The peasants were working the land and doing a host of other jobs to provide for their everyday needs. Others shared their farmhouse with livestock. Normally there were some heated living rooms near the kitchen, which served as the centre for spinning/weaving/dressmaking, dairy, butchering, and tanning. Medieval merchants also worked their trades from home.

Not much changed in the next few hundred years: 17th- and 18th-century craftspeople, such as silk weavers and watchmakers, lived in workhouses.

After the Industrial Revolution, home-based work continued to thrive. Shopkeepers, funeral parlours, and schools featured proprietors. Even teachers lived and worked in the same building.

The immigrants who flowed into New York City during the late 1800s and early 1900s often took in work in their tenement apartments, where the heat and lack of fresh air led to the term “sweatshops.”

From parties to telecommuting

And then came Earl Tupper, inventor and manufacturer of plastic containers to store food and other goods. Browni Wise teamed up with him and invented a new way to sell: “Tupper Parties” spawned an entire industry of in-home sales.

Technology advanced alongside the rise of cars to commute to the offices in the city. Some of us remember the oil crises in the late 1970s. Jack Nilles was working remotely on a complex NASA communication system, and the term “telecommuting” was invented. Telecommuting was proposed as a solution to traffic tangles as well as limited resources.

In the 1980s, IBM installed “remote terminals” in several employees’ homes, as some companies began officially experimenting with telecommuting and work from home.

By 2009, 40% of IBM’s 386,000 global employees already worked at home (the company noted that it had reduced its office space by 78 million square feet and saved about $100 million in the US annually as a result).

Which brings us to today, a substantial percentage of Millennials, the largest demographic in the workforce, are working as Freelancers (42% of 18-to-34-year-olds now freelance). Working from home or telecommuting is a critical part of their way of life and work.

2020 is a real game-changer. Companies have been forced to embrace telecommuting amid stay-at-home orders for all nonessential positions and businesses. In the process, corporations like Twitter, Google, Square, Spotify, Shopify, Amazon, Microsoft, Facebook, and eyeson.team, are seeing proof that productivity does not suffer. Workers who are telecommuting and not returning to their offices are productive, and they do accomplish their work tasks.